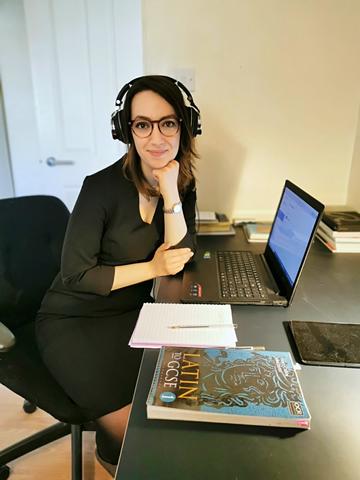 Thirty-two state school pupils aged 14-16 are continuing to study Latin thanks to the University of Oxford’s speedy decision to provide teaching online.

Staff from the Faculty of Classics moved from face-to-face teaching on Saturdays to online instruction in March before the government decided to close schools due to the coronavirus crisis. The shift means children from schools unable to offer Latin in their curriculum can continue to study Latin GCSE as part of the OXLAT scheme. The scheme, which is generously supported by the Stonehouse Educational Foundation, is for children attending state schools in Oxfordshire, Berkshire and Buckinghamshire.

Teachers and pupils have embraced the new online model, and are using tools and resources, including Google Classroom and Zoom, to distribute worksheets and presentations, and communicate with each other in real time. The approach augments the pupils’ previous use of virtual learning environment technology.

Emma Searle, coordinator of the OXLAT scheme, is positive about the response from the pupils and her two fellow teachers. She said: ‘Pupils are really embracing this new online-only approach. It is important at this time, not just from a learning perspective, but also because it combats the feelings of loneliness and other ill effects experienced by many because of the lockdown. The transition has been a success so far because of the expertise, dedication, and commitment of my two colleagues, Elena Vacca and Charlotte Causer. They have adapted and re-planned whole schemes of work and produced new materials at the drop of a hat and have led the way with the adoption of different tools and applications.’

Richard Stonehouse is a trustee of the Stonehouse Educational Foundation, which has funded the OXLAT scheme since 2014. He said: ‘We are delighted to hear of the creative methods by which you are continuing the teaching of the current OXLAT cohort in spite of present difficulties. Well done in keeping it going and I hope this cohort achieves similar success to the previous ones.’

The OXLAT scheme has a successful track record of preparing students for Latin GCSE with 74 students having participated in the scheme since it began. Last year, 22 pupils took Latin GCSE following their completion of the OXLAT scheme: 10 achieved the maximum number grade of 9, 6 achieved 8, and 3 achieved 7 (9, 8, and 7 are recognised as top number grades – the equivalent of former A* and A grades).